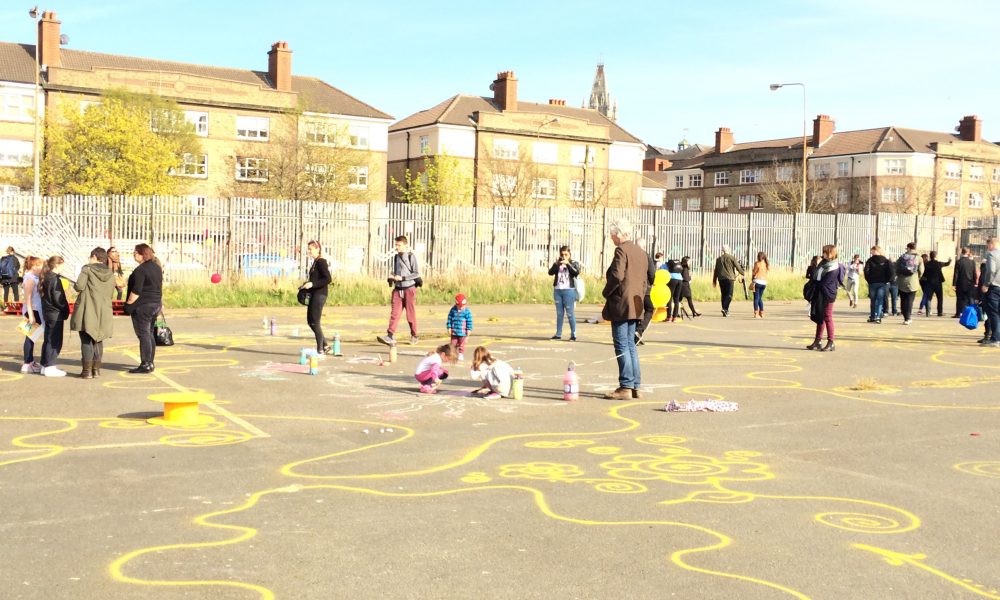 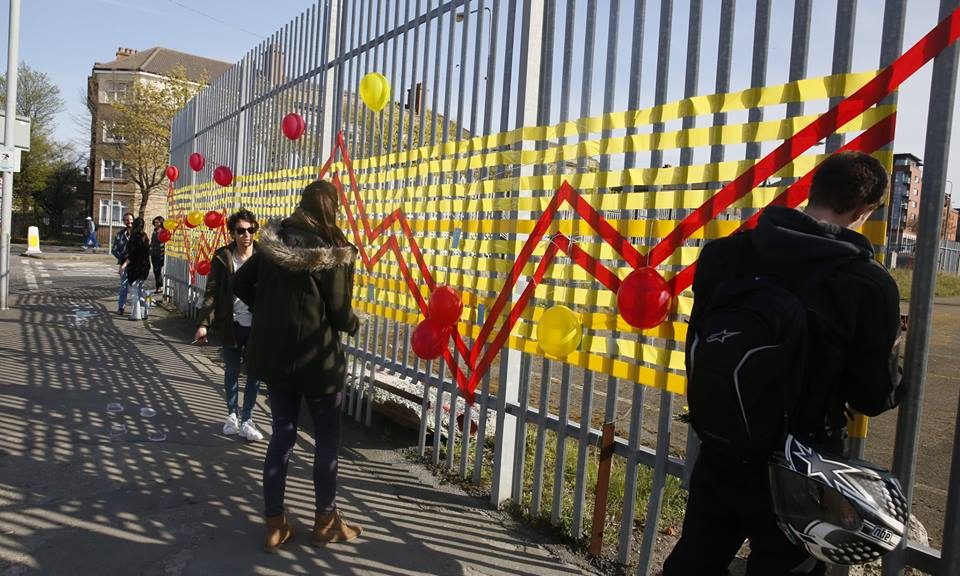 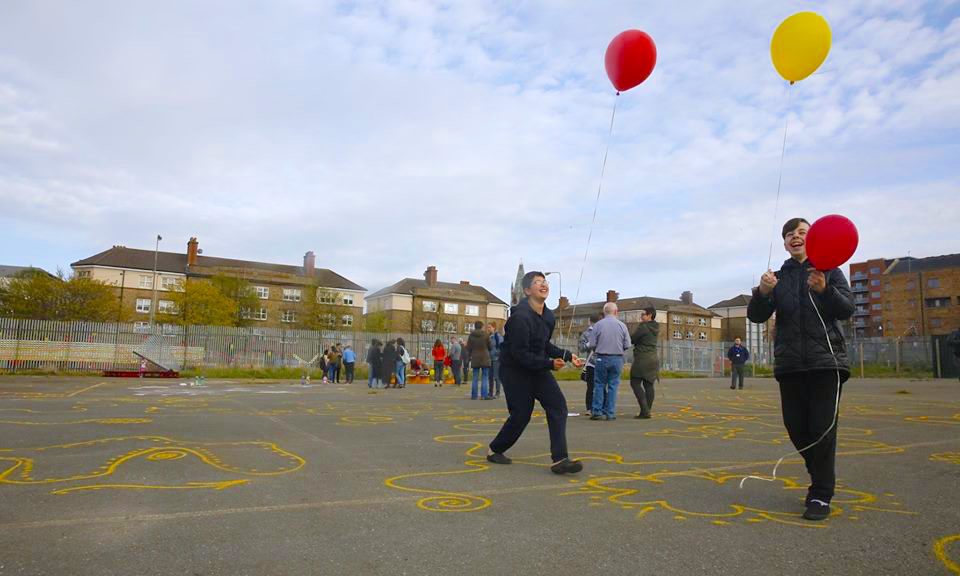 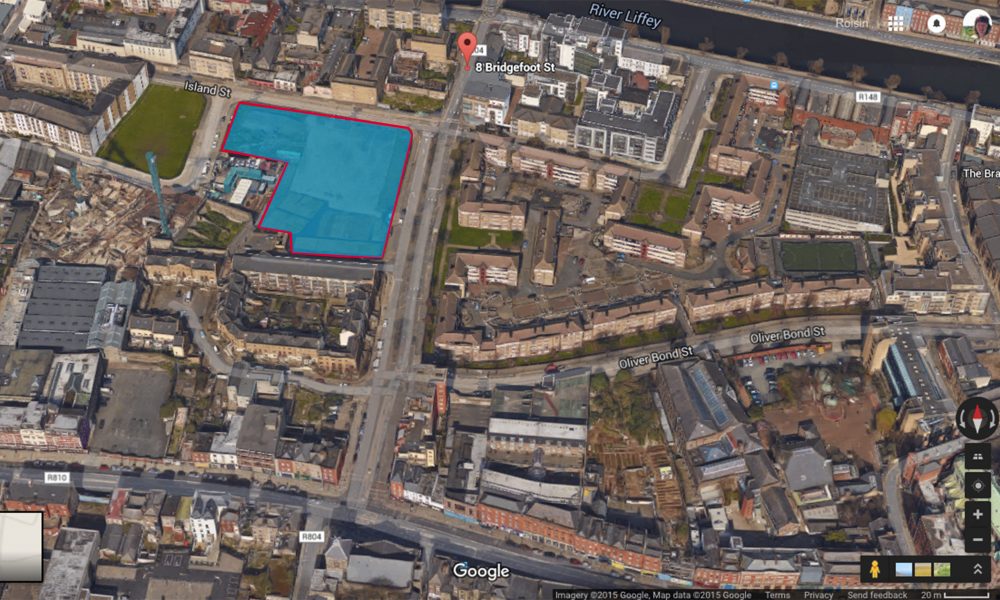 As a Landscape architect and research assistant on the EU FP7 TURAS project the practice was able to witness the Bridgefoot community in their endeavours to activate the vacant space in their neighbourhood.

Witnessing: the work of the community to activate the place, how they formed a core team of dedicated people, and how they built support.

Sharing Knowledge: Bringing the Liberties Greening Strategy, and the work of the Cork Street Campaign to the attention of the community. Understanding of DCC’s different departments, department objectives, and the development plan.

Becoming a Catalyst:  through a collaborative approach to placemake, through organising a Pop Up Event which connected the many actors to the space, and raised the public perception to the possibilities of place.

Report Writing: Writing + Editing collaborator contributions to a professional report of the event for dissemination, transparency and knowledge sharing.

EU TURAS: Transitioning towards Urban Resilience And Sustainability.
The TURAS initiative brings urban communities and businesses together with local authorities and academic researchers to innovate and collaborate on developing practical new solutions for building sustainable and resilient European cities.

Roisin Byrne, (UCD, TURAS research assistant
and landscape architect), has been allowed witness
the Bridgefoot Park Community Campaign since March 2015. The community was interested to build awareness of the site, as a neighborhood park for the Liberties area. The park is schematically set out in the Liberties Environmental Improvements Plan, published 2014. According to the plan the Liberties area is low in quality green space (0.7sqm/person) compared to the rest of the city (49sqm/person). (http://www.dublincity.ie/sites/ default/files/content/Recreation-andCulture/Dub- linCityParks/Documents/liberties%20green- ing%20 strategy.pdf)

In January 2016 Roisin Byrne invited Sophie von Maltzan, (SME, Fieldworks & Strategies, UCD Land-scape Architecture site-specific module tutor) to consider the Bridgefoot site for the site-specific student learning elective. The students visited the site on several occasions and became familiar with its history and context. They were also given a tour of the surrounding area by local activist Tony O Rourke, an active member of the Bridgefoot Park community campaign. Tony highlighted the lack
of ‘Places for the kids to play’ in the area. Having considered the context and precedents for land-scape / artistic interventions the students made low cost proposals to the Parks and Landscape Services department of Dublin City Council. These proposals were approved and a collaborative process of pre-paring the site for the ‘Pop Up’ was initiated from there.

As part of their site-specific elective module 20 Students from UCD Landscape Architecture under-took a project to design a Pop Up intervention. This event took place on the weekend of April 22nd-23rd 2016. The UCD students worked in four groups to develop interventions. Their aim was to recreate awareness of the site among the people of the Liberties area through colorful, playful interactive sculptural tem-porary interventions. Also, their intention was to attract people to the site and allow opportunities to change perceptions of the site, to open the site to allow people from the Liberties to familiarize themselves with the site. This event marked the beginning of the participatory process both for the students , community of interest, Parks and Local area department (to record what the people of the area want for the site). On the day, Dermot Foley Landscape Architects; Simon Cruz, Philip Doran and Ana Ogric joined in to converse with those who arrived. The team showed blank plans and introduced design elements to con-sider, such as play areas and seating.

2. Pop Up Interventions
To the exterior of the site, a fence intervention con-sisted of colorful tape and blue parcel labels with
‘I wish …’ written on them. These were attached to the fence. At the Pop Up event people were invited to write their wishes for the site on them. Helium balloons were used on the fence and together with the tape made an inviting impression on approach. Within the site, to the horizontal plane of the old tennis courts, line-marking paint was used to make a large scale playful doodle pattern. At the event the children were invited to interact in various ways of imaginative play. The students mixed large quan-tities of chalk paint, which were used to color out the doodle. Chalk paint was also used on the sur-rounding paths to point people towards the Pop Up event. Cable spools and pallets were used as movable seating and tables. The UCD Students also inter-viewed members of the community with respect
to their history, connection and their wishes for the site.

Over the two days 55 people who were not part of the Bridgefoot Park community campaign or students attended the Pop Up event. The ‘I wish’ labels on the outer fence were harvest-ed digitally, below a list of wishes I wish…

I wish… For a playground
For a community shed
For happiness
For a skate park
For more council housing
A place for children to play
There was something for all the kids to keep them entertained
Some green
To remove asphalt, railings, plant trees, flowers benches
I could have a playground and football pitch
A nice park for kids
We could have a nice park
We miss trees in Dublin and we are from Amsterdam
Something for the kids
A community park Green area
Forest Park, Water Feature
To have a park for everyone.